Start a Wiki
Super Why! (a.k.a. The Reading Adventures of Super Why!) is a CGI animated show developed by Angela C. Santomero and Samantha Freeman Alpert. The series is produced by New York City-based Out of the Blue Enterprises and Toronto-based DHX Media through its Decode Entertainment division.

The series is still currently rerunning and has reached 104 episodes in total.

The Super WHY! mission is to inspire children to develop a lifelong love of reading and books. The Super WHY! television series is the first preschool show designed to help children 3 to 6 learn to read through interactive story adventures! The adventures take place in Storybrook Village, a magical three-dimensional world behind the shelves in your library, where all of your favorite fairytale characters live, including four best friends: Red, from Little Red Riding Hood; Pig from The Three Little Pigs, Princess from The Princess & the Pea, and Whyatt, the curious younger brother of Jack from Jack and the Beanstalk, who discovers he has the power to fly inside books to find the answers to his questions.

Super Why takes place in the land of Storybrook Village, a place where all Fairytale characters reside together in a loving, peaceful community. Whyatt will begin the show by greeting the viewers when he suddenly gets a call from someone who needs help. After investigating the problem at hand, Whyatt then summons the other super readers by sending out a call.

Whyatt, Pig, Red Riding Hood, and Princess Pea then each appear at the Book Club before going inside as Whyatt then uploads the problem into the Super Duper Computer by plugging his PDA-like device into it. The character with the problem then stands behind a small lectern made of dominos and explains their situation. After discussion, Princess Pea then casts a spell to summon the appropriate book.

Whyatt then reads the title of the book as they then transform and fly inside of it.

Upon landing, Whyatt will begin to read a few sentences of the book with the viewer, asking them to read along. It's then a parallel is drawn in which the character with a problem notices how the book characters face the same problem as they are right now.

The goal of the Super Readers is to follow the storyline to solve the problem. As they progress through the events of the story, they encounter obstacles, which can be solved by applying their literacy skills to change the story. As they overcome these obstacles, they are rewarded with red glittery "Super Letters" that are then eventually uploaded back onto the Super Duper Computer to spell out the word that makes up the solution to the characters problem.

After collecting the Super Letters and uploading them onto the Super Duper Computer in order to get the Super Story answer, Whyatt will then ask why that word in particular is the right word. Someone else will then explain it before everybody then goes on their own to do what they had been doing previously. Except for Whyatt, who then goes to the problem directly in order to see how it went.

In some episodes such as Judith's Happy Chanukah and The Underwater Lost Treasure, the premise of the show is shifted slightly to have the Super Readers solve mysteries and questions instead of problems.

The series has many characters in books, and in Storybook Village. But it stars 4 (eventually/on and off 5) Super Readers:

Whyatt - The leader of the group of characters who become the "Super Readers", Whyatt is an olive-skinned, blue eyed, brown-haired boy who wears a dark blue polo shirt with green stripes and khaki pants. In the episode "Jack and the Beanstalk", it is revealed that Whyatt's older brother is Jack, the hero of the English folk tale Jack and the Beanstalk. Whyatt lives with his mother, who writes stories, and his father who illustrates them, along with baby sister Joy but not his brother. Jack appears in some episodes but generally is "away at college." When Whyatt introduces himself at the Book Club, he says, "Whyatt here!" His superhero form is Super Why. In this form, he has a green mask, turbo sneakers, a blue cape, and a Why Writer. His symbol is a question mark. He focuses on vocabulary.

Pig - Pig enjoys pretending and dressing up like his father, a construction worker. His superhero form is Alpha Pig. His Alphabet Toolbox has an Alphabet Map, a Lucky Letter Lasso, Brilliant Binoculars, a Mega Magnifying Glass and a Fabulous Flashlight in it. His symbol is a triangle. When he enters, he says, “P is for pig!”. He focuses on the alphabet.

Red - The title character from the fairy tale, she only refers to herself as "Red Riding Hood" and is a freckle-faced pale skinned brunette/redhead who wears a red dress and red roller skates as well as a red flat cap. When she is introduced, she says "Red Riding Hood rolling in!" When she turns to Wonder Red in her superhero form, her clothing becomes a blue armless and legless jumpsuit with red trim, her skates are turned blue and her special item is a red and blue basket. It is called a Wonder Words Basket and her symbol is a spiral. She focuses on word families like "ON", "AT", "A", "UMP", "AND", etc.

Princess Pea - Princess Pea was named after the children's story "The Princess and the Pea"; it is shown in the episode The Princess and The Pea that the princess in that story was Pea's mother and the prince in that story was her father. However, in this case "Pea" is her surname. She wears a lavender princess dress and loves to dance. When she enters, she says, "Princess Pea at your service!" Her superhero form is Princess Presto and in this form she wears a pink gown. Her symbol is a star because she always takes her Magic Spelling Wand with her. She focuses on spelling.

Puppy- The occasional fifth member of the group. He also lives with Whyatt and his family. When he turns into Woofster, he has dictionary power and can find the meaning to any word. His Super Reader form allows him the power to speak also and his symbol is a dog bone. He is also declared the fifth Super Reader. He officially became a Super Reader in the episode "Woofster Finds a Home".

Super You is the television viewer. Whyatt always invites the viewer to join them by describing him or her as "Super You, with the power to help."

On March 1, 2012, Directors & Producers of Yo Gabba Gabba Live! announced Super Why! Live: You've Got the Power!

In May of that year, the live show announced the tour dates were going to be that summer. 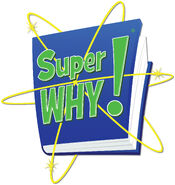 Add a photo to this gallery
Retrieved from "https://superwhy.fandom.com/wiki/Super_Why!?oldid=9288"
Community content is available under CC-BY-SA unless otherwise noted.